The tranquil and charming township of Jericho is situated on the banks of the Jordan River, south of Lake Galilee. It was originally settled when the railway line reached the banks of the Jordan River in 1885. Named after a pioneer of the area Harry Jordan, Jericho - because of its biblical sounding name - became connected with the story of Joshua and the walls of Jericho.

A group of local artists and historians have created a structure that tells the story of how Joshua won the battle of Jericho. The structure, called the Crystal Trumpeters, is located in the main thoroughfare, Darwin Street and is an interesting stopping off point on your journey.

Jericho is home to one of the smallest, still operating drive-in theatres in Australia. Once a month the theatre hosts a movie-double featuring the latest movies.

Redbank Park on the banks of the Jordan River is a great place to camp, fish and bird watch. There is a walking track that follows the river and it's a great place to exercise while experiencing the local flora and fauna.

Jericho also has a number of interesting and colourful murals painted by local residents. One of the most popular is the two goannas having a beer in Darwin Street. 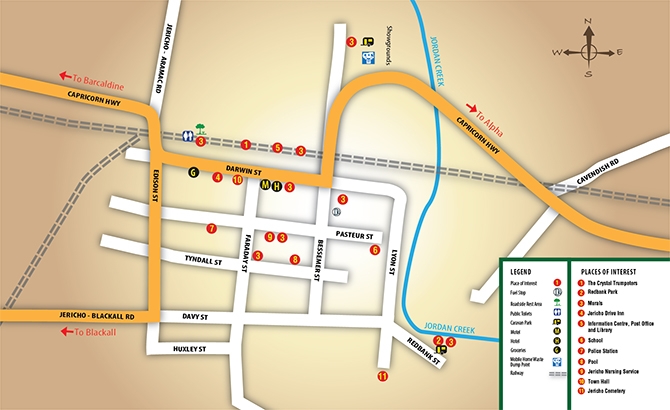