Barcaldine is situated on the junction of the Capricorn and Landsborough Highways and known as the Garden City of the West. We are the largest town in the Barcaldine Regional Council area and are proud of our interesting and famous history.

Barcaldine is home to the Tree of Knowledge, the reputed birth place of the labour movement in Australia. The Tree - a ghost gum - grew outside the Railway Station for about 180 years until 2006 when sadly, it was poisoned by an unknown culprit. The famous tree has been preserved and placed under an award winning timber structure that was constructed to protect the preserved tree and celebrate its importance in Australia's history. The structure is impressive during the day but when viewed at night it is truly magnificent.

The name Barcaldine originates from the Oban region in Scotland. Donald Charles Cameron was one of the first settlers in our district and a direct descendant of the Campbells of Barcaldine Castle. He settled on a portion of land fronting the Alice River and immediately named his property "Barcaldine Downs". The railway line came as far as Lagoon Creek in 1886 and the township of Barcaldine developed on land from the Barcaldine Downs run.

We are a friendly community and encourage our visitors to not just stop and have a holiday but to take the opportunity to become involved in our community. 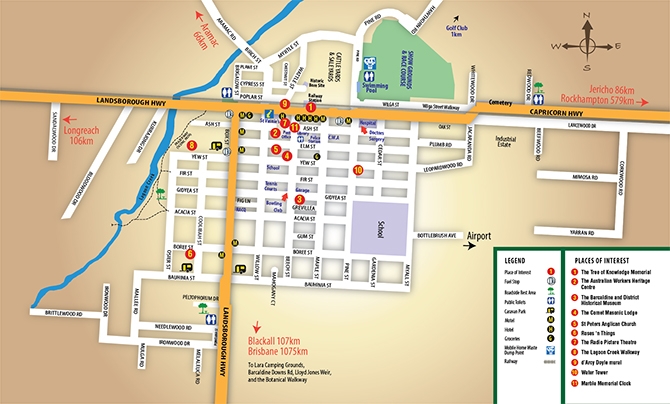