The Tree of Knowledge is a ghost gum (Eucalyptus Papuana) growing in the main street in Barcaldine. It is situated in front of the Railway station and is celebrated as being the central meeting place for the Shearers' Strike during the upheaval in 1891.

Although the shearers' strike spread far and wide, Barcaldine became the central point of the strike leaders who were sentenced with conspiracy receiving three years hard labour. Although the dispute was settled before this the 13 leaders still had to serve their three years.

This disturbance eventually led to the formation of the Australian Labour party. The Tree of Knowledge committee commemorates the 1892 struggle with a beautifully landscaped garden. The tree is said to be at least 170 years old.

The Tree of Knowledge was included in the National Heritage List on 26 January 2006. Sadly it was poisoned in 2006 and did not recover. However, a memorial has been erected and was opened on 2 May 2009. 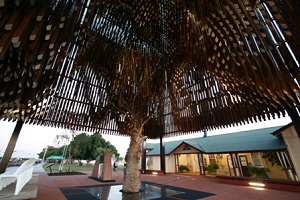 The recently completed 'The Globe' is a multifunctional building designed specifically for arts and tourism. The restored hotel contains a modern Visitor Information Centre, 'History on Oak' showcasing the history of The Globe and the Barcaldine township, and the 'Galilee Gallery' which will host exhibitions, displays, art functions and events. 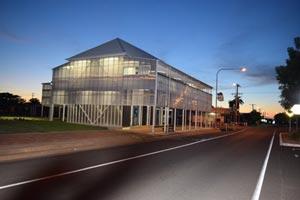 Additional displays are added from time to time. Family days are held the last Sunday of the month from March to November with mini steam train rides with smoko and lunch available. The museum is open from 7.00am to 5.00pm every day except Good Friday and Christmas Day. 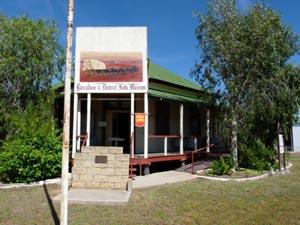 The theatre first opened in 1926 with silent movies and then sound movies were introduced in 1931. After numerous years of closure, the theatre reopened in 1995. The theatre still provides the old style canvas seats for comfort when movies are screened. Check out the theatre foyer for the latest screening times and upcoming movies. The theatre is located in Beech Street. 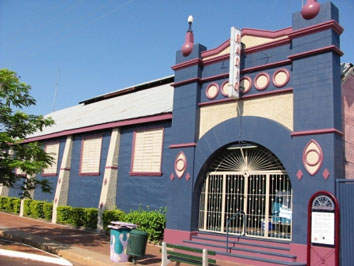 www.australianworkersheritagecentre.com.au
Visit The Australian Workers Heritage Centre, custodians of the rich history, heritage and traditions of all working Australians. Within this museum styled complex, visitors can journey through exhibition space and historic work places of yesteryear- capturing the spirit of our nations' workers and where the stories of Australia's working history comes to life.

Designed with the weary traveller in mind and offering a place for reflection, The Australian Workers Heritage Centre is situated on over 2 hectares of beautifully landscaped gardens, complete with a bore-fed billabong of Olympic sized proportions. This oasis in the Outback also provides the convenience of picnic, BBQ and playground facilities with an onsite retail outlet. 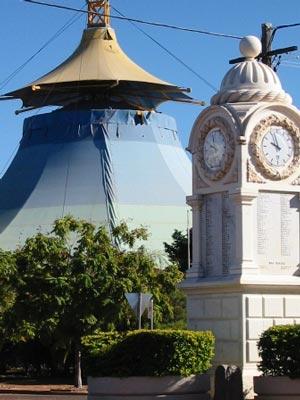 Between the Bougainvilleas is an award-winning heritage trail, which showcases some of Barcaldine's varied and colourful history. Maroon signs featuring windmill logo have been placed at significant historical sites around Barcaldine. Each sign gives you a brief history of the site and a photo of what originally stood at the site. By obtaining a booklet from the Information Centre, you can either walk or drive along the mapped out Heritage Trail. 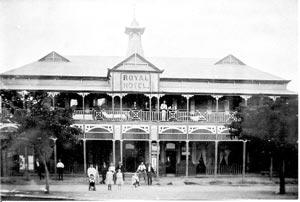 The Lloyd-Jones Weir was built in 1952-53 and first filled in 1954. The scenic area offers picnic facilities with BBQ, water, bird watching, shady eucalyptus, covered rest areas as well as being a great fishing and swimming spot during the wet season. A quiet and restful area away from the noise of everyday living. The Lloyd-Jones Weir is 5km along the highway towards Blackall where you turn right and travel for about 9km then turn left on to a sandy soil road for about 1km. 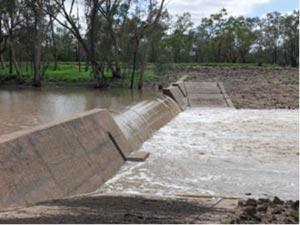 If you are musically inclined you might like to try playing the Thong-a-phone and Marimba which are located in Oak Street. These large musical instruments were constructed as part of a public art works program and visitors are encouraged to try their hand at playing them. 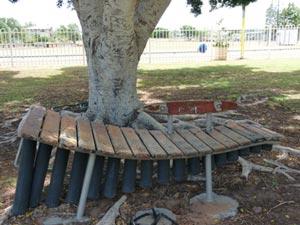 The large windmill in Oak Street is a symbol of the importance of Artesian Water in the daily life of the people of the Outback. The Windmill was manufactured in Rockhampton in September 1917 by the Sidney Williams Company. The windmill was originally erected on the site of the "first flowing bore in Queensland" at Back Creek. 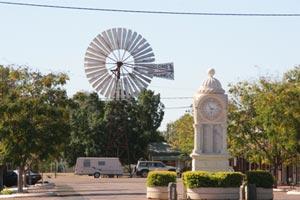 Barcaldine is home to a number of wonderful murals. One of the most important is a painting of a sand goanna by Australian iconic painter d'Arcy Doyle. d'Arcy painted and donated the painting to the community of Barcaldine in appreciation of the wonderful time he had while holidaying here. 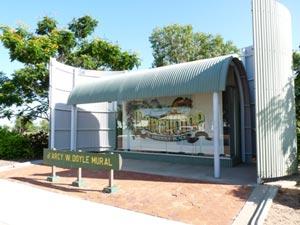 NATIONAL HERITAGE LISTED BUILDING
The Comet Masonic Lodge was built in 1901 and is one of the most unusual buildings in Barcaldine. Built from iron and timber it has a painted facade front and back which has been designed to make the building look as if it is made from brick. It is still used as a Masonic Temple and meetings are held once a month. Tours of the Lodge by a local mason can be arranged by contacting the Barcaldine Visitor Information Centre. 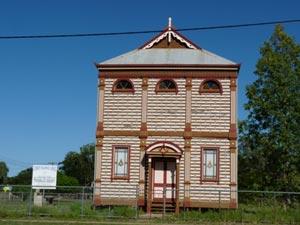 During the months of August and September, the countryside 40km east of Barcaldine erupts into a blaze of colour with spectacular displays of native wildflowers that can be seen easily from the roadside. These very fragile and beautiful flowers never fail to amaze visitors with their ability to survive and grow in very harsh conditions. 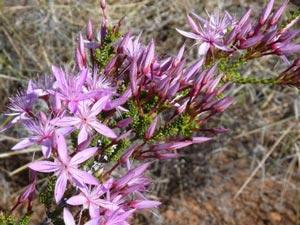 On the outskirts of Barcaldine, Lagoon Creek is a popular walking and bird watching spot. There are two kilometres of concrete walking tracks nestled in native vegetation. You are welcome to also walk your dog along the paths. Wildlife such as kangaroos and emus use Lagoon Creek as a watering point, so all dogs must be kept on a leash.

Early mornings and evenings are the best time to view wildlife at Lagoon Creek. Many beautiful native birds are seen here including water birds, finches, brolgas and fairy wrens. A list of local birds can be obtained from the Visitor Information Centre. 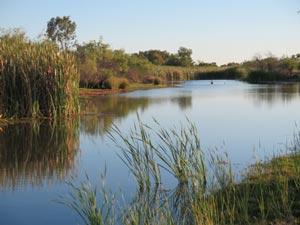 The Barcaldine Botanical Park situated 9km south of Barcaldine on the Landsborough Highway is a bushland experience not to miss. The park consists of land which has been set aside for the purpose of helping to educate the public on the local flora and fauna. There is a designated walking track which has a number of plants identified by special tags giving the botanical name, the common name and the way it may have been used by the local Aboriginal community. Camping is not allowed. 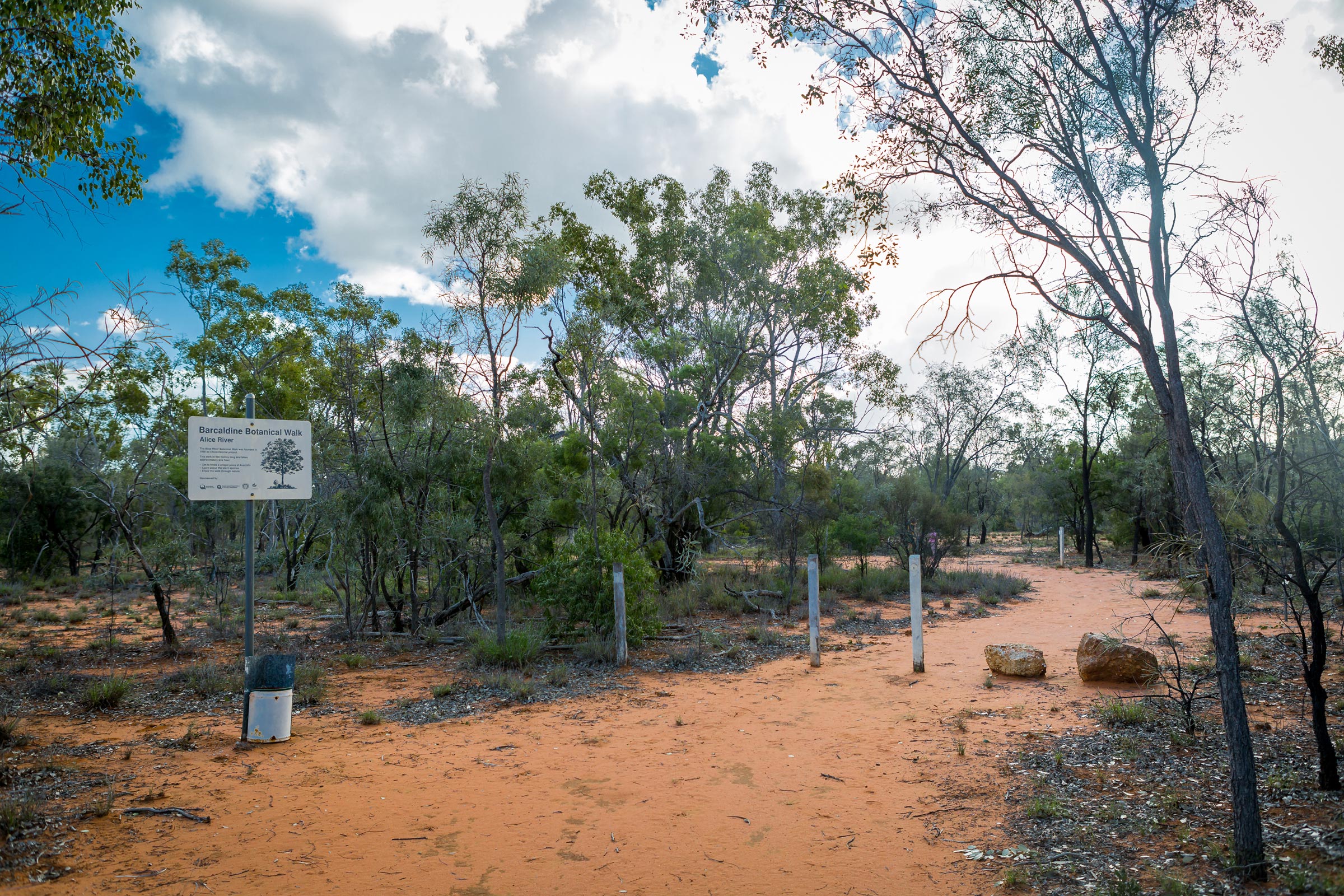 Lara Station is 28km South of Barcaldine and 78km North of Blackall on the Landsborough Highway, look for the yellow and black Lara sign. Follow the signs for 13km along a graded dirt road to the booking office. Spend some time at one of the tranquil shady camping spots surrounded by wetlands abundant with birds and wildlife, a photographers joy. Enjoy a campfire and star gazing at night, whilst enjoying the sounds of the nightlife. 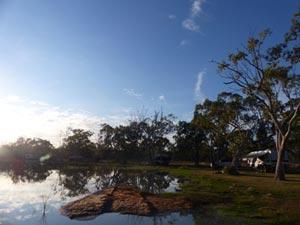 Tag Along Tours on family-owned sheep and cattle property 'Dunraven', 1362 Isisford Road, Barcaldine QLD 4725.
Tuesdays and Fridays at 9.00am.
Bookings are essential.
$25.00 per person - morning smoko included.
Please contact Roberta Doneley on 0427 511 651 or email: rfmoyse@hotmail.com for further information.
Open during Winter months or by appointment.

The gates are now open at the Barcaldine Rec Park for you to enjoy a wide range of water sports, non-water recreation or just sit on the deck and enjoy the lapping of the water.  The lake is 1,100m long and 250m wide with a maximum water depth of 3.2m and is compliant with international and Australian water skiing standard.  The facility is approximately 1km from the town centre so it is in easy walking distance for the local community and also provides large areas for cars and trailer parking.  Further development is planned for the park so there is no reason not to come back and check in progress. 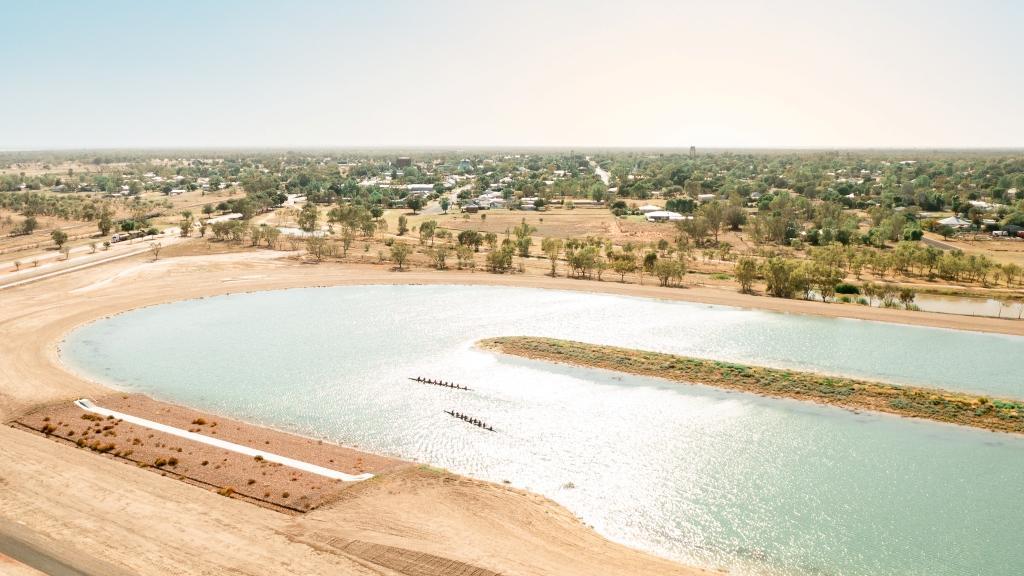 The Recreational Drone Flying Park is open from 7.00am to sunset Monday to Friday for your enjoy flying your drone.

The park is a designated areas where Barcaldine Regional Council approves the ﬂying of recreational drones in accordance with the Civil Aviation Safety Authority (CASA) rules, regulations and recommendations. For more information please visit CASA's website.

Rules of the park

You are only allowed to launch and ﬂy your remotely piloted aircraft/drone in this designated park without prior consent of Barcaldine Regional Council if: 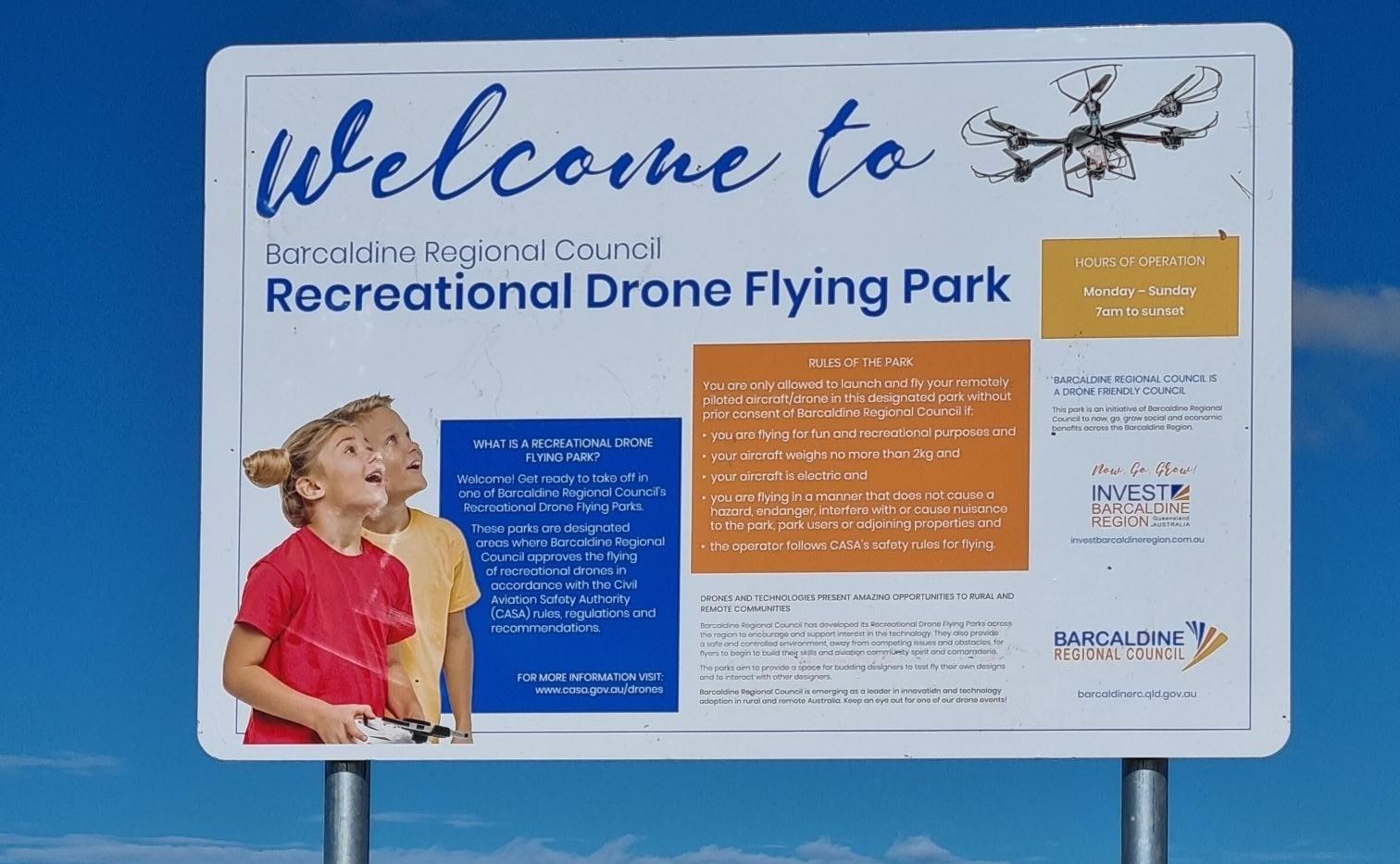 Why not enjoy the delights of Barcaldine while getting some exercise by hiring a bicycle. They can be hired from the Visitor Information Centre for $2.00 per bike per day. Conditions do apply. 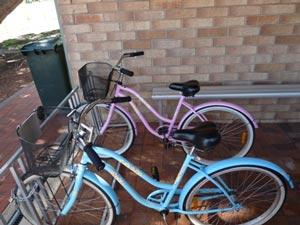