The Lake Dunn Sculpture Trail features 40 sculptures along the way as well as the renowned Gray Rock historical site, the wonder of Horsetailer’s Gorge, the mystical Healing Circle and the glorious Lake Dunn.  More sculptures are being added each year so keep your eyes out for new additions.

The Lake Dunn Sculpture Trail is a circuit starting in Aramac but is also accessible from Jericho. You can travel the loop either way and it covers a distance of approximately 200km.

Before you leave Aramac, take the time to find the giant scrap metal Red Roo that is situated at the town’s roo works.

How did the sculptures get there? Ask a local and you may be told an interesting story about a sheila with a few roos loose in the top paddock. In reality, the sculptures are the works of a local sculptor, Milynda Rogers, who did reside on a grazing property along the trail and decided she needed a platform to display her work. The result is one of the biggest, permanent, outdoor sculpture exhibitions in the world. She has combined her love of sculpture and incredible ability to turn junk into art to fulfil her wish to put a smile on the faces of the people who travel through one of the most beautiful and historical parts of Queensland.

To view and print a copy of the current Lake Dunn Sculpture Trail brochure, click here.
Please note, two more sculptures have been added to the trail since the current brochure was produced so keep an eye out for them. 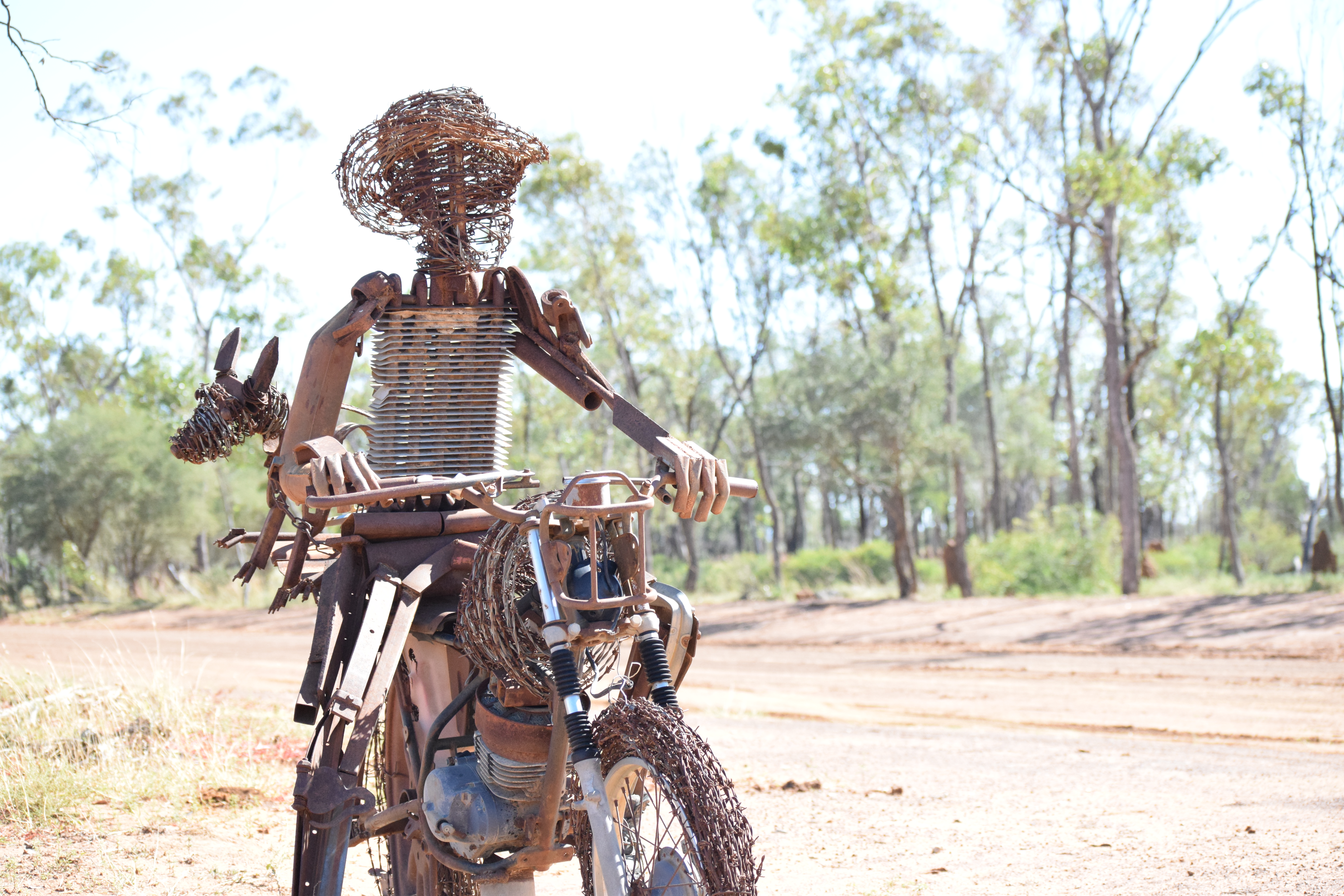 Lake Dunn, more commonly known as The Lake, is a freshwater lake 68km north-east of Aramac. Lake Dunn's Aboriginal name is pajingo bola, meaning "Big Fella Waterhole" and is 3.21km long and 1.6km wide. It was named after James Dunn, who was a head stockman at Mt Cornish Station and discovered it when he tracked a mob of cattle there.

Lake Dunn is a birdwatchers paradise and is home to over 80 different species of birds. It is also an excellent fishing spot for Golden Perch (yellowbelly) and Black Bream.

Lake Dunn is perfect for swimming, water-skiing, windsurfing and sailing and is an ideal camping and picnic spot. Other facilities include waterfront holiday huts, tennis courts, an airstrip, camping ground with power, toilets and hot and cold showers.

For Cabin hire, please contact The Lake on 07 4651 0565. Cabins sleep five persons and have a refrigerator and electric kettle. Bring your own crockery, cutlery, bedding and food. Barbecues are available. 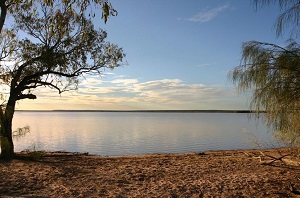 Gray Rock, situated on a spur of the Great Dividing Range approximately 35km east of Aramac, was a logical choice for the establishment of a hotel, better known as Wayside Pub where the Cobb and Co coaches would call for the night en-route from Clermont to Aramac before the railway line was completed.
The railway, snaking from Rockhampton, reached Jericho on 2 June 1885 and Barcaldine on 7 June 1886. 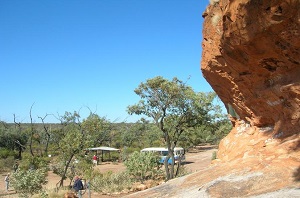 Horsetailer's Gorge was used by drovers to camp at night. The horsetailer's used to drive their horses into the gorge so they would not stray at night.
The horsetailer's job was to look after the horses and put them into the best patch of feed and make sure they got into camp soon after daylight each morning. Each man would catch a horse and saddle it up ready for the day. 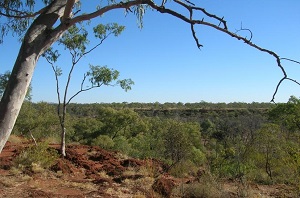 The park was opened in 1949. The names of the men and women who enlisted in the Second World War (1939-1945) are engraved on the entrance gates. Located within the park is a 25-metre swimming pool and splash pad which was opened in 2017 together with an amenities block. The bowling green and tennis courts are located adjacent to the swimming pool and the Harry Redford Community Centre complements this facility. 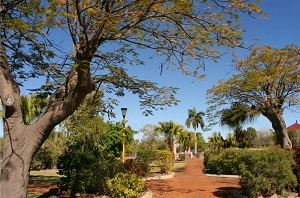 This monument was erected in 1924 and is engraved with the names of men and women from the Aramac Shire who enlisted in the 1914-1918 World War. 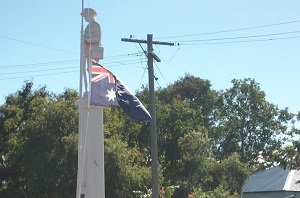 A bold step was taken by the Aramac Shire Council in 1909 when it decided to borrow £66,500 to build a tramway from Barcaldine to Aramac. In 1911, with the loan secured and planning complete, the Council moved to appoint Mr. George Phillips, Civil Engineer "with full powers to carry out the construction of the tramline".

The first train carried 150 passengers who paid a return fare of 4 shillings. There were 5 sidings on the tramline for the convenience of pastoralists in the immediate vicinity. The line measured forty-one miles from the locomotive shed in Aramac to the Lagoon Creek in Barcaldine. There were 7,216 pairs of rails, 101,024 sleepers and 404,096 dog spikes. The approximate weight of the rails was 2,706 tonnes.

With the completion of an all-weather road from Aramac to Barcaldine in 1975 and the removal of State Government subsidy funds together with the high cost of maintenance, wages and the lack of sufficient revenue from the gradual decline of goods and livestock for transport the tramway ceased operations on 31 December 1975.

The Council owned three steam locomotives in the years in which it operated the tramway. In 1963 the council purchased a XQGR RM rail motor dubbed "Aunt Emma" by the locals. The RM 28 rail motor was made in the Ipswich Railway Workshops.

When the tramway closed it was the last privately owned line in Queensland. 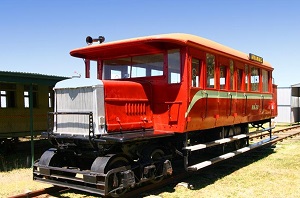 Come and see the replica of the white bull in the main street of Aramac and be reminded of Captain Starlight (Harry Redford) who has become a local legend. Patrick McCarthy, in his book ‘The Man Who Was Starlight', has proven that Redford's name was actually Henry Readford. But whether he was ‘Redford' or ‘Readford', he had become known as Captain Starlight – a fictitious name from Rolfe Boldrewood's Australian classic "Robbery Under Arms".

Captain Starlight became part of outback folklore when in 1870, in the company of two others, he set out from Bowen Downs (located in Aramac Shire) with 1,000 head of stolen cattle. The mob included a white bull which was to prove something of a problem to Redford. He sold it at Hill Hill Station in South Australia so that he could purchase supplies from the station store. The bull was later shipped back to Queensland as evidence against Redford at his trial.

Not long after his return to the east, Redford faced charges of stealing, the trial being held in Roma, Queensland. The jury returned a verdict of not guilty thus ending one of the most daring escapades in recorded history. 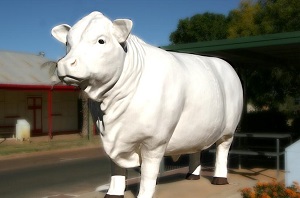 Over 19 unforgettable, spectacular days, some of Australia's most experienced drovers will drove 600 head of cattle by horseback through the twists of the ragged Redford trail and reliving one of the world's greatest cattle duffing drives known to man. 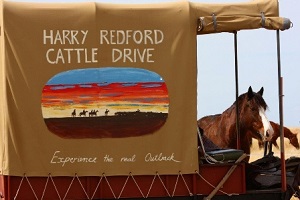 The Henry 'Harry' Redford Interpretive Gallery is part of the Rural Transaction Centre in Gordon Street Aramac. The Gallery contains information on the fascinating story of Harry and his cattle duffing exploits, along with information, merchandise and photographs from the annual Harry Redford Cattle Drives. 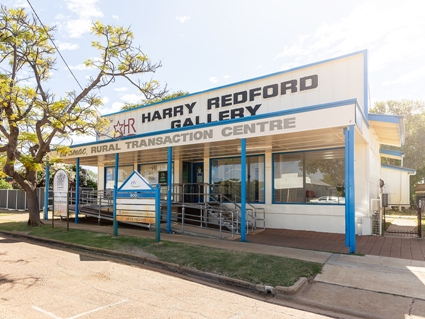 The stone healing circle is an interesting stopping point on your journey to Lake Dunn. It is an ancient sacred healing circle which is connected to six others in the world. The others are located in Japan, Tibet, Madagascar, Peru, Turkey and the United States of America. When you step into the centre - the eye of God - you are connected to the energies of all seven circles. The circle is used for prayer, meditation and healing of the mind, body and soul. It is located on private property so please be considerate when visiting. Camping is not allowed. 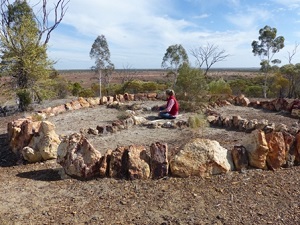